Now that would be a sweet name for an emo band.

But here it is, and I'm hoping that this is one of many volumes:

I drove out to a tiny woodsy neighborhood of cul-de-sacs today off RIO Road (which use to be called Route Ten until people in Charlottesville decided to be retarded...I hope Alexandria doesn't soon spawn people calling our favorite strip-mall-Applebee's corridor RI Road) and started knocking door-to-door to find people to interview for a story I'm working on. This activity was prescribed by my boss, who apparently has not seen the Sexual Predators Map of this area. Anyway, after I chatted it up with a harmless-looking older man listening to headphones, he directed me to the home of an elderly couple who had lived there for 20 years.

The nice old lady got side-tracked, as old people often do, and started bragging about her granddaughter, as all awesome old people always do. Apparently she's a sixteen-year-old who plays drums. She rocks. At least, that's what the drummer for the Dave Mathews Band told her. Seriously, grandma alleges. It happened for real.

But the real talent in the band is the lead singer/guitarist kind (grandpa shakes his head at this. Our granddaughter is the real talent, he says.) But this boy has been away for six months, at sea. At SEA? Well you see, his mother is a professor at the University, and she took her family with her to Semester At Sea...

His mother isn't any old professor. His mother taught me fiction writing. She sent me an anthology of American fiction in the mail to my home in Northern Virginia, for god sakes. Me and Lizzie-girl go WAY back.

So there you have it: I interviewed my teacher's son's bandmate's grandma and grandpa. I guess that's only four degrees. It left me feeling kind of good about life in general and Self, Solitude and Connectedness (but that's another story for another occasion entirely). But it also left me extremely jealous of this sixteen-year-old drummer who has the respect of someone in DMB (whose name I still think is missing a U, but still. Their respect is kind of a big deal). I think grandma could tell, and as I walked out the door she told me I still had time to learn how to play in a band; I was so young.

Only a woman named "Bunny" could come up with this 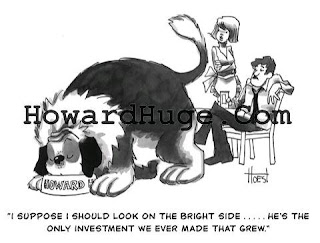 I just saw Howard Huge. And just like the comic strip, it wasn’t even funny.

I knew as I ran down that I had made a wrong turn into the Secret Lives of Wealthy Charlottesvillians. There were gardens here. And bunnies. And quaint cottage-mansions protected from the outside hooligans like me by enormous bush-fortresses.

As I trekked to the end of the road, obviously too caught up in whatever I was listening to to notice the blatant error with reality, I stopped at a miniature bridge leading to a clearing in the woods. Like any yuppie cottage-mansion dweller would dream of having in his backyard, I saw in the distance the glowing cursive-ish sign for Barnes and Noble. I’d really entered an alternate universe now, and no more than .5 miles away from my own modest bedroom.

I turned around, deciding I could get overpriced lattes and the Best of Emmylou Harris some other time (Barnes and Noble sells books, too? No way.) And that’s when I heard the loudest bark ever known to man.

God, I thought, that thing’s gonna kill me. And that was before I even saw it.

The sight shocked me about as much as a real-life version of Clifford the Big Red Dog. There was Howard Huge, a breed of dog that I had believed to be entirely fictional until today. I was worried he might chase me down/paw me to death, but I found that just like in the pathetically short wiki article for Howard Huge, he was “somewhat of a gentle giant.”

This all took place not too far from . Perhaps on my future runs, cows will populate my school, my teacher will have an ear on top of her head that hears thoughts, and I, Marissa, (actually Maurecia, but in fourth grade this seemed to be my first and only opportunity to almost share a name with a fictional character. In tenth grade my theory proved to be incorrect.) will be forced to read aloud the dictionary page with “Journey” on it after I accidentally ripped it out and felt terrible about it. 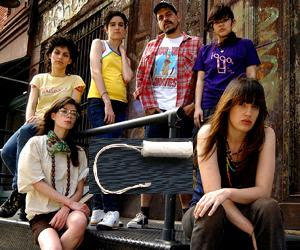 Oh, it sounds real sensational. It almost sounds like that dumb portugese band that everyone loved after they made that iPod commercial—CSS. Cansei de Ser Sexy. (Me too.) But doesn’t it sound a little too…convenient…to be true?

Toxic Shock Syndrome- the SYNDROME where you wear a tampon so long that your state of being unclean sends you into toxic shock. Toxic shock? Aren’t those adjectives…overkill? Isn’t the fact that it is a SYNDROME bad enough?

But let’s be honest. If there was no such SYNDROME, what would stop people from wearing the same tampon all day? (I should really stop saying “people,” but these days, who knows.) Also, have you ever heard of someone dying from this SYNDROME? Granted, dying from this is somewhat embarrassing. A little like dying from gangrene or leprosy. Only much more dramatic sounding.

Oh, she died of Toxic Shock Syndrome??? Was it one of those hairdryers-falling-in-the-bathtub type thing? Oh….that’s the TAMPON thing? Gross.

So basically, what I think I’m trying to say is, you could probably wear the same tampon for years if you really wanted to. All TSS stands for is Tamponcompany $$making $cheme. Yeah.