7 Modern-Day Remakes of That Scene from Say Anything… 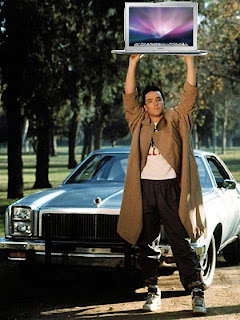 7. Macbook Air + extension cables + Beats headphones. Throw them ‘phones up to the window. Try not to be like, careful with those headphones, bitch! Shit’s expensive! Dre made those!

5. You should use the most influential invention of the late 90’s—the Silent Shout Lollipop. Wait—you really don’t know what I’m talking about? Wow. Somebody was way too into those Stargate: SG-1 marathons.  Anyway, throw your special lady a lollipop that will play music in her mouth. Resist the urge to change the song to Lil’ Wayne—“Lollipop.” Or don’t. Up to you.

4. You know, Say Anything… wasn’t really John Cusack’s best work. He’s really matured as an actor since then. You would be better off channeling his much more romantic role from The Raven. Bring your Kindle over (or your Kobo…I’m sorry. Did you really get a Kobo? I’m so, so sorry.) and read her some “Annabel Lee”! Nothing says, “I really liked sleeping with you that one time” like a poem that basically says “I WANT TO SLEEP NEXT TO YOUR TOMB FOREVER, MY COUSIN.”

3. Get real meta with it and instead of playing Peter Gabriel, play something by the band Say Anything! But be careful. Their songs are kind of weird. And that guy kind of sounds like he’s always throwing up…

2. You just banged this girl and you want to play her a song about her EYES? No, no. You should be playing her a song about what’s really important to you…DAT ASS! Pop out the tired Peter Gabriel and replace it with Bubba Sparxxx- “Miss New Booty.” You FOUND her, after all.

1. This is the 21st century, man. What are you doing off your ass?! Just send her a Spotify playlist. Spend the time and effort saved JOing and playing Call of Duty.
Posted by sA at 5:18 PM No comments: