As I am just entering motherhood and my thirties, I have to say my search criteria for a good girlfriend has narrowed quite a bit. By summer, I will have a daughter, and significantly less free time. That being the case, I’m not looking to waste my time with people who don’t truly make me happy.

My husband and I just moved from Nashville back to our hometown of the DC suburbs. It may sound ideal--moving home, picking back up where we left off, with a baby on the way. But in some ways it’s the loneliest set of circumstances in the world. Here we are, back where we started. Old friends had moved on to lives without us. New friends are hard to make. It isn’t exactly easy to put yourself out there when you’re pregnant, you can’t drink, and everyone assumes a lot of boring, lame things about you.

But if I could befriend anyone, if I could somehow advertise myself on a friend-making site without getting solicitations for threesomes, I’ll tell you who I’m not looking for:

I’m not looking for a “Good Girl.”

Good Girls first appeared in my life the way a lot of other mysterious phenomena did--through a song. Good Girls, as described by Tom Petty, enjoyed the most generic swath of things: Elvis. Horses. America. Jesus. 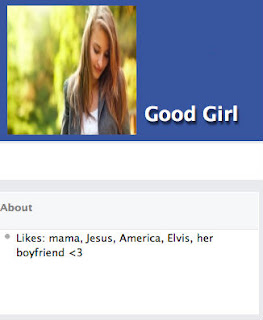 Part of me felt there had to be something more. If you rearranged the letters, did they spell out some kind of sexual deviance he was actually after? If you played the song backwards, did it explain how good girls were actually kind of a snooze-fest, and no one wanted to date them, not even Tom Petty, apparently, as he goes on to state that he doesn’t even miss her, and seems to say without regret that he broke her heart?

I felt sorry for the good girl, but I couldn’t necessarily relate to her.

To me, the song is kind of a sequel to Billy Joel’s “Only The Good Die Young.” The oh-so-cleverly named Virginia listened to the fatalistic plea for her to ditch her Catholic faith in favor of Billy Joel’s penis, and she went ahead and said no. In chapter two, the world is moving on from her. The bad boys are standing in the shadows. The good girls are home with broken hearts.

Chapter three is her eating a pint of Ben and Jerry’s with her mama (yet another unique thing she loves), watching a bad movie, going to Youth Group the next day, finding a nice boy who will wait til marriage, then having like 42 kids together and quitting her career. Not really the makings of a hit song, in my opinion.

Don’t get me wrong. It isn’t someone who could be on the reality TV series Bad Girls Club that I’m seeking. I don’t want someone whose life could in any way be compared to a natural disaster, someone to suck me into their drama.

I just want someone with a few enemies.

Enemies are an important part of life. Having an enemy shows that there is some aspect of you that is controversial. If you love things like Elvis and horses, no one can really disagree with you. But at the same time, there are no nuances to interests that generic. No one can truly bond over something like that. It’s like saying you like the beach in hopes of uncovering some kind of miraculous common interest with someone.

The best friends I’ve ever had are ones who have made serious mistakes in their past. They are reformed heartless bitches who are now somewhat back on the straight and narrow. They are currently kind, empathetic creatures, but there’s also some guy out there who has considered running them over with his car, or at the very least has smashed up belongings of hers--her DVD collection, her Nintendo 64.

I want a girlfriend who knows that there are people out there who talk about her behind her back. As women, we can’t make everyone happy, and furthermore, we shouldn’t. If we did, not only would we put our happiness on the line--we’d put our personhood on the line, too.

No one is talking shit about Good Girls. Not so much because of their innocence, but more because there isn’t a ton to say. Tom Petty could only get one verse in about her before even he had to move on.

I want a girlfriend who might be out to dinner with me and then say all of a sudden, “Oh shit, we need to leave,” because they see someone connected with their old life who’ll eternally hate them. We’ll throw money down on the table and stumble out, drunk on laughter and shame, and find refuge somewhere in the parking lot where we can sit down and mock the social media of whoever that person just was. She’ll explain why they will eternally see her as some ice queen, and I’ll laugh and know she’s my kind.