this bottle of beast is taking me home 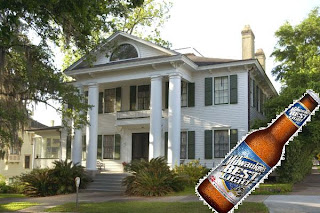 I need to stop. Really. I was stalking people from kindergarten (again!) and I happened upon a super...(I'm not saying it) depressing quote that sounded like it could be from some terribly (again, it's not happening) whiny song. So I googled it, of course. And then I happened upon this blog:

Bottle of broken hearts. Yep. But don't ask how they got in there. I am personally more intrigued by the pear inside the liquor bottle on Bea's shelf.

At first, I thought that this blog was some poor middle-schooler pouring his heart out. But as I read on, I was embarrassed to realize that I actually knew about 60% of the song lyrics posted here. Eh. An interesting literary technique used in this blog ( I suppose since the words are unoriginal, we've got to give this kid something) is the use of spaced out adverbs. For example:

My teacher told me not to use adverbs unless it was absolutely necessary. Is it here? I guess that's debatable. Maybe some people were a little too busy drawing black hearts in class to catch that advice.